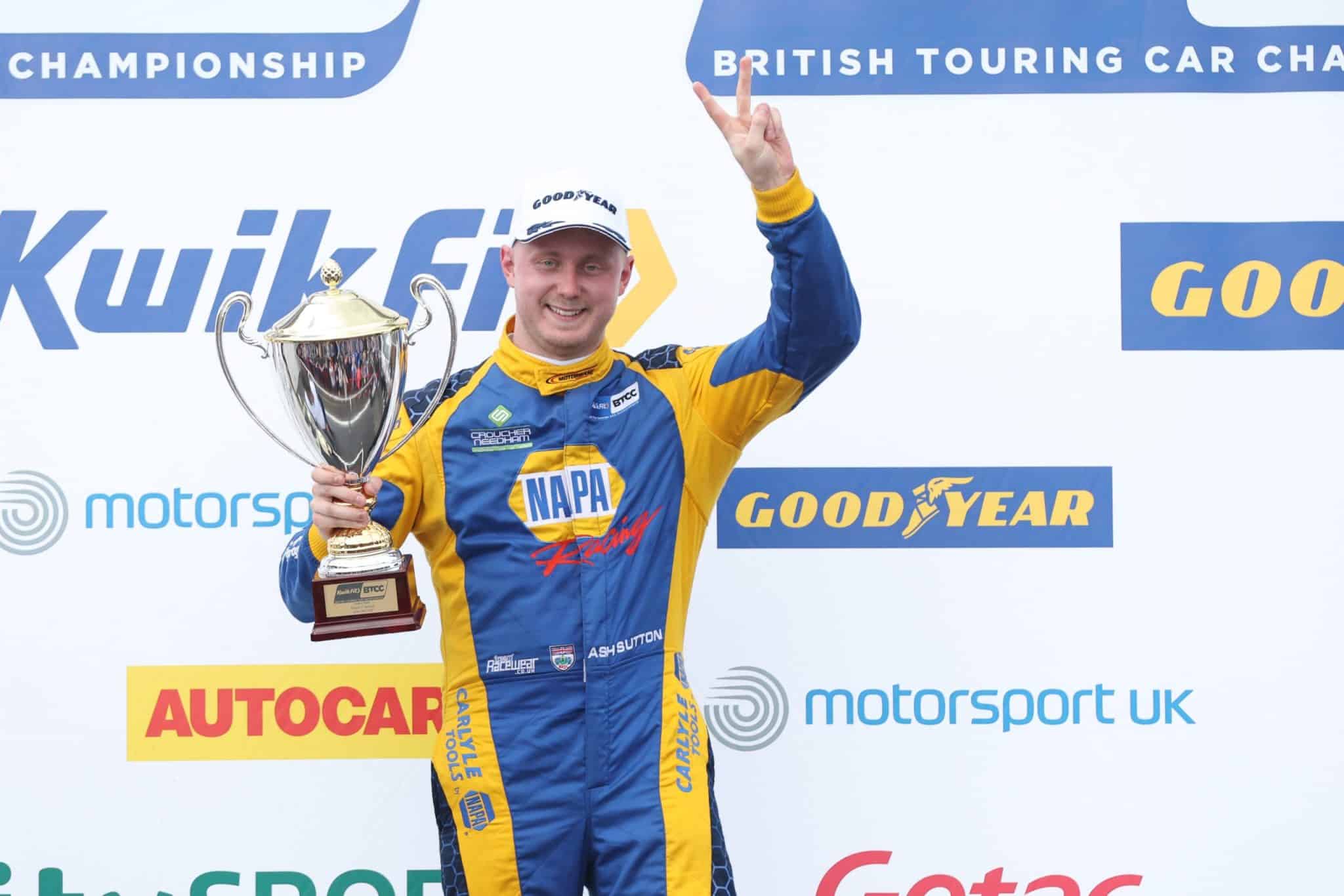 Posted at 07:52h in News, Race Reports by Chris Ashby

Ashley Sutton extended his tally of podium finishes in the 2022 Kwik Fit British Touring Car Championship at Oulton Park this past weekend (June 11/12) – scoring an impressive pair of second-place results to maintain his title challenge.

Coming off the back of a memorable meeting at Thruxton where he bagged a clean sweep of rostrum finishes, the NAPA Racing UK driver was in fine form as he closed the gap to the standings summit in his Ford Focus ST.

Saturday’s qualifying session around the picturesque Cheshire circuit saw the reigning three-time champion feature towards the top of the order throughout. Setting a best time of 1:25.738, the 28-year-old lined up fifth for the first of Sunday’s three contests.

Race one saw Ashley make a flying start as he jumped up to fourth on the opening tour and then dispatched the Hyundai of Dan Lloyd for third with a clever pass at the Island Hairpin following an early safety car period.

A few laps later the BRDC Member was on the move again as he produced a sensational overtake on Rory Butcher for second at the Island Hairpin, having ran side-by-side with the Toyota all the way from The Avenue. Once into second it was a straightforward drive to the chequered flag.

Ashley again took second in race two – stretching his run of consecutive podium finishes to five – with a relatively routine performance. Getting the better of Butcher in the early stages, the front-wheel-drive ran soon pulled clear of the chasing pack and enjoyed an untroubled cruise to the finish behind eventual winner Tom Ingram.

Starting 11th virtue of the reverse grid draw for race three, Ashley narrowly missed out on a points finish after being forced to fight his way from last following a visit to the pit lane early on.

Making progress as soon as the lights went out, Ashley was already into the top ten when he had to take avoiding action on the run towards Hislops, scooping up a load of grass in the process, as several cars came together.

Joining the back of the pack after his brief visit to pits, Ashley showcased his overtaking prowess to fight up the order from the back and finish 16th.

At the end of the fourth event of the season, Ashley now sits third in the BTCC Drivers’ Championship, just 18 points behind leader Josh Cook.

Ashley Sutton: “To score two podium finishes is mega but it’s a little bittersweet as the hard work of races one and two was slightly undone by the result in race three. That said, we’re still in the mix towards the top of the standings and that’s what it’s about at this stage.

“Huge credit has to go to the whole NAPA Racing UK team, that is the best the car felt in race trim this season – we’re really starting to find the sweet spot now with the Ford. We pulled some good moves in race one and then in race two it was just about shadowing Tom, he just had the edge on us.

“If I’m honest, some of the driving standards I witnessed when I was trying to come back through the pack in that last one left a lot to be desired. I’m all for hard and fair racing but there were a few instances where that wasn’t the case. I’m just glad that everyone walked away relatively unhurt from that big crash.

“I’m looking forward to heading up to Croft next as its a circuit I’ve always enjoyed and one that the car should go well around. I’m confident we should be strong and I’ll be gunning for that first win of the season; that would be a nice way to head into the summer break!”

The Kwik Fit British Touring Car Championship continues in less than two weeks’ time on June 25/26, when it reaches the halfway point in the 2022 season at Croft Circuit.