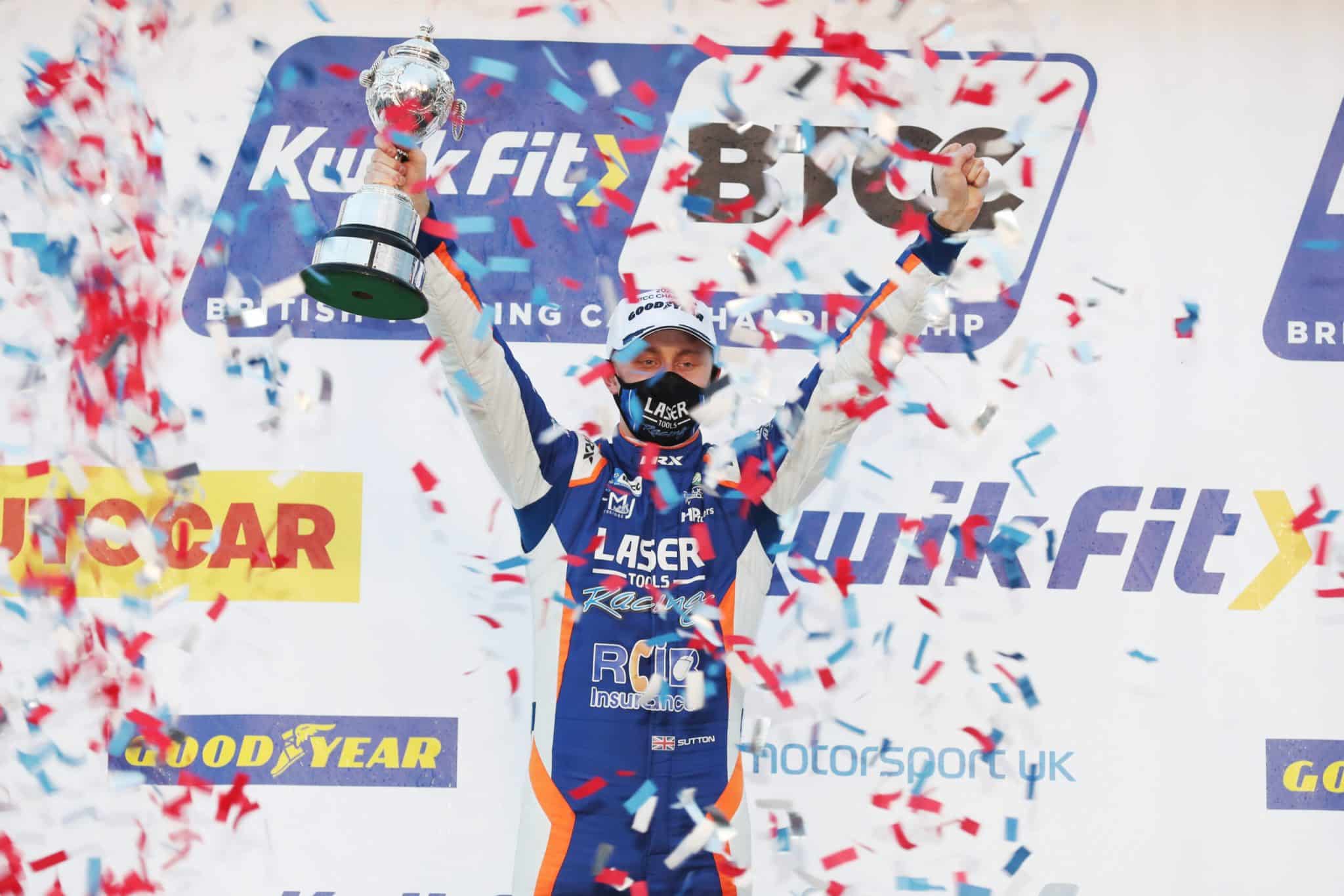 Posted at 18:59h in News, Race Reports by Chris Ashby

Ashley Sutton has been crowned Kwik Fit British Touring Car Champion for the second time in his career at Brands Hatch this past weekend (November 14/15) to end a sensational 2020 campaign.

Heading into the season finale sitting second in the standings and needing to overturn a nine-point deficit to Colin Turkington, the Infiniti Q50 driver produced a superlative final day performance to become a two-time champion by 14 points.

The BRDC Superstar kicked off his weekend on the right foot with a stunning qualifying display, mastering the favourable wet conditions to set the third fastest time despite being ladened with 54kgs of success ballast.

With conditions having worsened come Sunday, the rear-wheel-drive ace began his pursuit of a second crown with a brilliant podium in race one. In the thick of the action at the front of the field from start-to-finish, the 2017 champion scythed into second place in the latter stages and soon set off in pursuit of leader Dan Cammish.

Setting a string of fastest laps, Ashley closed on Cammish in the remaining laps but was unable to find a way past, ultimately settling for second place.

Ashley edged closer in his quest to winning a second Drivers’ title by storming to victory in a pulsating wet-dry penultimate race of the season. Opting to run slick tyres and starting second, the 26-year-old held position during the early stages whilst those on wets came to the fore.

A handful of laps later however, the slick-shod cars were in the ascendancy and Ashley wasted no time in moving into the lead. Once out front, he powered his way to a commanding fifth win of the season and also the fastest lap of the race.

Starting the final contest of the campaign in 12th virtue of the reverse grid draw and holding an 11-point lead over Turkington, Ashley starred in treacherous conditions once again to wrap up the title.

Battling for position during a frenetic opening few tours, the five-time race winner was soon on the tail of Turkington and sat comfortably behind the BMW driver for several laps.

In the closing stages, Ashley finally made his move at Paddock Hill Bend and following a late pass on Josh Cook as well, he crossed the line in sixth to clinch the 2020 Kwik Fit British Touring Car Championship title.

Ashley Sutton: “Two-time British Touring Car Champion – what a feeling! This one feels even sweeter than back in 2017 and it’s an absolute dream; it’s been a while since an Independent team won the overall championship and huge credit has to go to everyone at Laser Tools Racing, BMR Engineering, all of the team sponsors, my own personal sponsors, my family and friends – none of this would have been possible without them.

“They say that the second title is easier to win than the first but I can tell you that isn’t the case at all. We came into the weekend as prepared as we could have been and I was feeling confident we would be strong in those wet conditions – I love them.

“I said I was going to come all guns blazing and I did that to a point, however I’ve learnt the lesson at Croft and knew that we had to be smart. Scoring a podium in the first race was a great start and then the car came alive in race two, it surprised me a bit. In race three I wasn’t willing to make a move on Colin until he made a mistake or left the door open, which he did and I made the most of it. I’d like to think that we won the championship in that last race with the inner racer showing.

“Back in March at Media Day we rolled out this brand new car but because of the pandemic we basically had to put it back on the shelf. We’ve had our ups and downs but everyone has pulled together to achieve three titles is phenomenal; not bad at all for a first year.

“Standing on that podium wasn’t the same without the fans, they really make the BTCC what it is. Hopefully we’ve been able to put on a show for everyone this season during what has been a difficult year and fingers crossed we will be able to welcome them back trackside in 2021.

“We’ll savour this moment but I’m really looking forward to what lies ahead. I want to make my mark on the BTCC, keep racking up the wins, podiums, championships and achieve the sort of things like Lewis [Hamilton] has done in F1.”