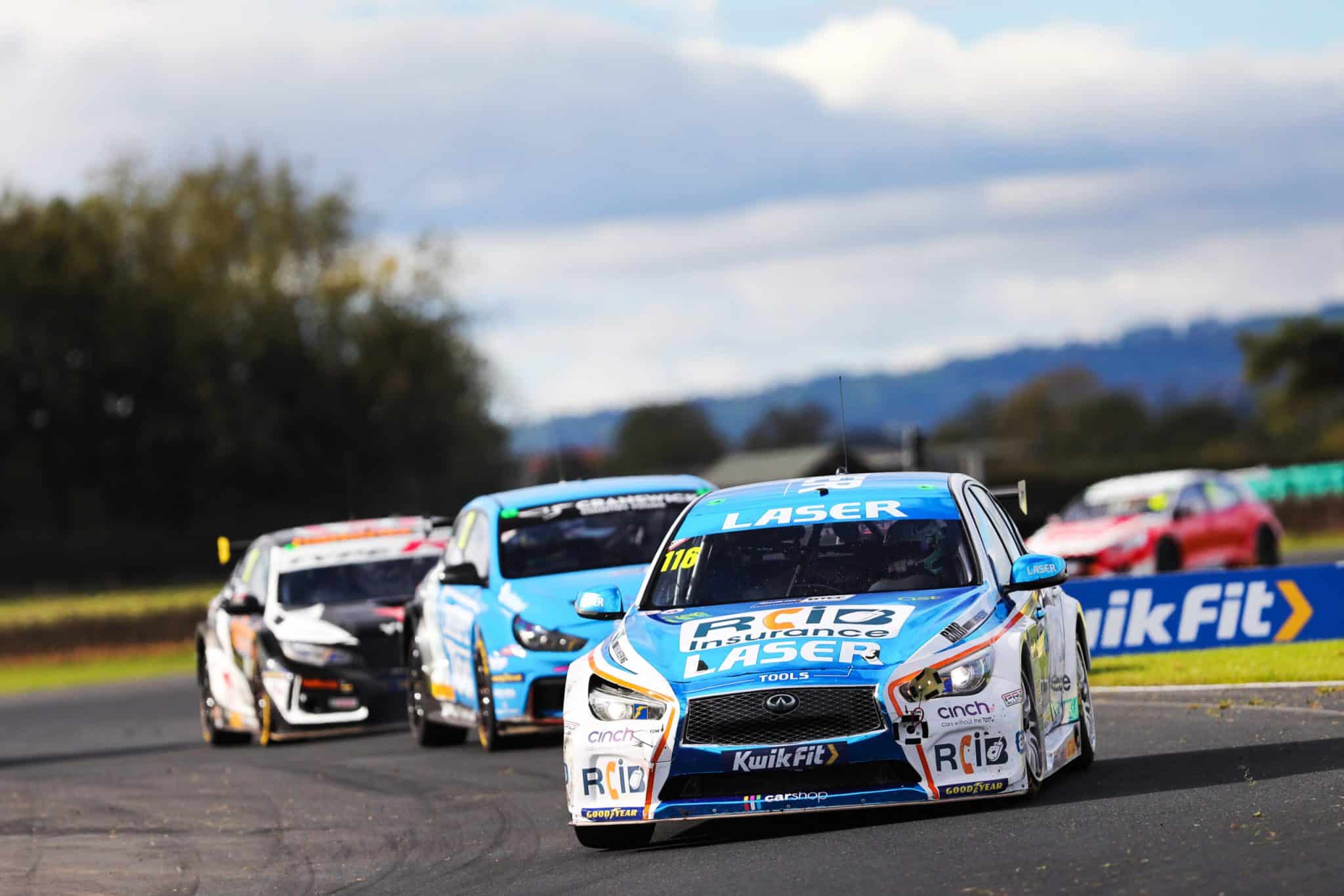 Posted at 16:56h in News, Race Reports by Chris Ashby

Ashley Sutton endured a rollercoaster of emotions at Croft this past weekend (October 10/11) to leave the North Yorkshire venue having extended his lead at the summit of the Kwik Fit British Touring Car Championship standings to seven points.

On what proved to be a blockbuster race day, the Laser Tools Racing driver produced a pair of stunning fightback drives to ensure he remains in the box seat to clinch UK motorsport’s most coveted prize for a second time.

Entering the seventh meeting of the season holding a slender advantage of four points, the 2017 champion found himself in the thick of the drama during a wet qualifying session around the 2.13-mile circuit.

Having sat on provisional pole position for a majority of the session, the Infiniti Q50 driver skated off the track at Clearvaux with less than ten minutes remaining, bringing out the red flag and subsequently losing his fastest time.

Unable to rejoin, Ashley was ultimately classified in eighth however this later became sixth following the exclusion of two rivals ahead of him.

Despite being ladened with 60kgs of success ballast, the 26-year-old wasted no time in moving forward in race one as he slipped into fourth by Tower Bend and then began to pursue main title protagonist Colin Turkington.

However, the very early stages saw Ashley sent spinning after contact from behind heading into the Complex, dropping him down the order to 13th. Widely renowned for his overtaking prowess, the BRDC Superstar put on a show and charged back through the order, making several eye-catching moves at the hairpin to finish fourth.

Lining up on the second row of the grid for race two, the former Jack Sears Trophy winner soon saw his fortunes turn upside down once again. Comfortably sitting in a podium position at the halfway stage of the contest, Ashley made a move for second place on Jake Hill heading into the hairpin.

Unfortunately, contact between the pair left Ashley with a front right puncture and forced  him into the pit-lane. Although he was able to rejoin, the 18-time race-winner finished a lap down in 20th.

Free of success ballast and with the pendulum of the title battle swinging in the balance, the rear-wheel-drive ace dug deep in the reverse grid encounter to produce another sensational performance.

Scything his way up the order either side of a lengthy safety car period, Ashley underlined his title credentials with a stellar performance behind the wheel to work his way up to fifth at the chequered flag.

Ashley Sutton: “What a rollercoaster weekend! As much as it is good for everyone watching at home, and as much as I love the recovery drives, I’m making life very hard for myself.

“I was optimistic we would be strong heading to Croft and that was evident given the pace we had. Race one was unfortunate but I managed to fight my way back and then race two was just one of those things. It’s a move that has paid off so many times but came back to bite us on this occasion.

“In hindsight I should have just settled for a podium but that isn’t in my nature and that’s why I was able to claw it back in race three, going from 20th to fifth.

“Everyone at Laser Tools Racing and BMR Engineering has done a mega job, they gave me the car to go and do the job, and it’s all worked out in our favour in the end to somehow stay in the lead of the standings.”

The Kwik Fit British Touring Car Championship next heads to Snetterton in under two weeks’ time on October 24/25 for the penultimate event of the 2020 campaign.