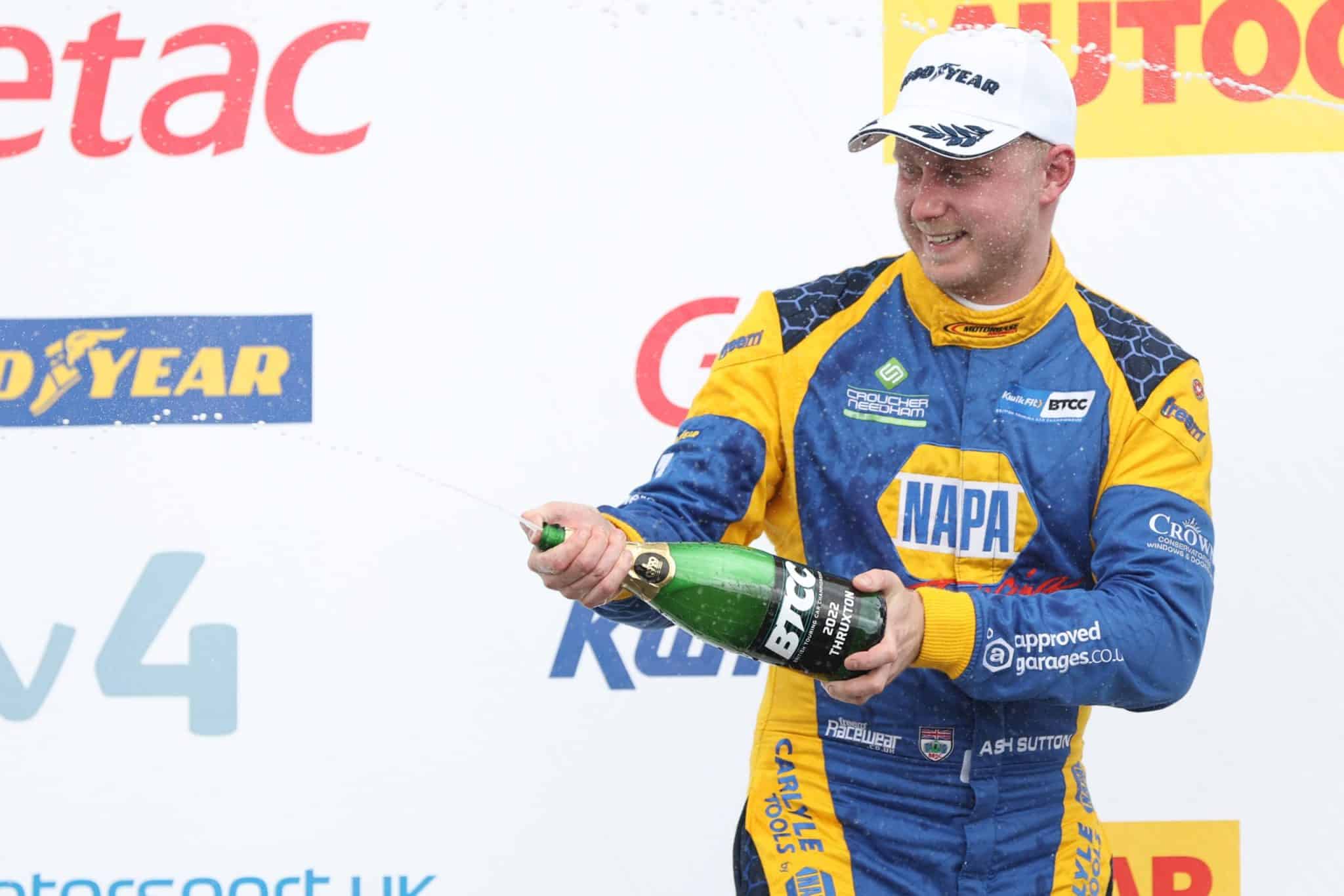 Posted at 06:39h in News, Race Reports by Chris Ashby

Ashley Sutton showed his class in the Kwik Fit British Touring Car Championship this past weekend (May 28/29) at Thruxton as he scored a hat-trick of podium finishes to move up to second in the standings.

Making the first of two visits to the fastest circuit in the UK this season, the NAPA Racing UK driver underlined his credentials as reigning champion in front of a bumper crowd by charging to third place in all three races.

Arriving at the Hampshire venue with a number of changes having been made to his Ford Focus ST between events, the 28-year-old was on the pace from the get-go during Saturday’s two free practice sessions, featuring towards the top of the times throughout.

Boosted by three seconds of hybrid deployment per lap in qualifying, Ashley carried his front-running form into the battle for pole position and ultimately went on to set a best time of 1:15.526 to clinch fifth on the grid for the opening contest.

The first of Sunday’s three races saw the three-time title winner produce a defensive masterclass as he powered his way to the final step on the podium.

Launching off the third row of the grid, the BRDC Member moved up to third during a fraught opening lap and then proceeded to fend off a gaggle of cars for the entirety of the 16-lap bout.

Making a few adjustments to his front-wheel-drive machine for race two, Ashley added to his silverware collection with a near carbon-copy performance from earlier in the day. Holding position off the line, Ashley kept Colin Turkington behind him throughout to net another third place finish.

Starting the final race in fifth virtue of the reverse grid draw, Ashley brought the curtain down on his weekend in Hampshire with yet another visit to the rostrum.

Gaining two positions on the opening tour, Ashley then fended off the advances of Jason Plato up to half-distance before the latter made a mistake and dropped back.

No longer under pressure, it didn’t take Ashley long to catch the top two and despite showing his nose at the final chicane he settled for third once again to take a clean sweep of podiums.

Following the third event of the season, Ashley trails series leader Josh Cook by 23 points in the BTCC Drivers’ Championship, with plenty of racing still to come.

Ashley Sutton: “Going home with three trophies isn’t a bad weekend at all! We’ve made a real step forward with the car and to bring home three podiums is a great reward for all the hard work everyone at NAPA Racing UK and Motorbase Performance has put in.

“As soon as the car rolled out we were on it and arguably we should have been on the front row in qualifying. If I’m honest, we made a change overnight which did the opposite of what we wanted to do and that meant I was a bit of a cork in a bottle for race one.

“Once we reverted that issue the car felt really good in races two and three. I did try and have a little go at Colin late on in the reverse grid race but he just closed the door before I could make it stick. Still, to come away with three podiums is mega and just what we needed in the title battle as Josh (Cook) was on it this weekend.

“We’ve got a bit of momentum behind us now so I’m looking forward to going to Oulton Park. It’s a circuit you’ve got to really attack, which certainly suits my style, so hopefully we can get the car dialled in, hit the ground running and see what we can achieve.”

The Kwik Fit British Touring Car Championship continues in less than two weeks’ time on June 11/12 for the annual visit to Oulton Park.