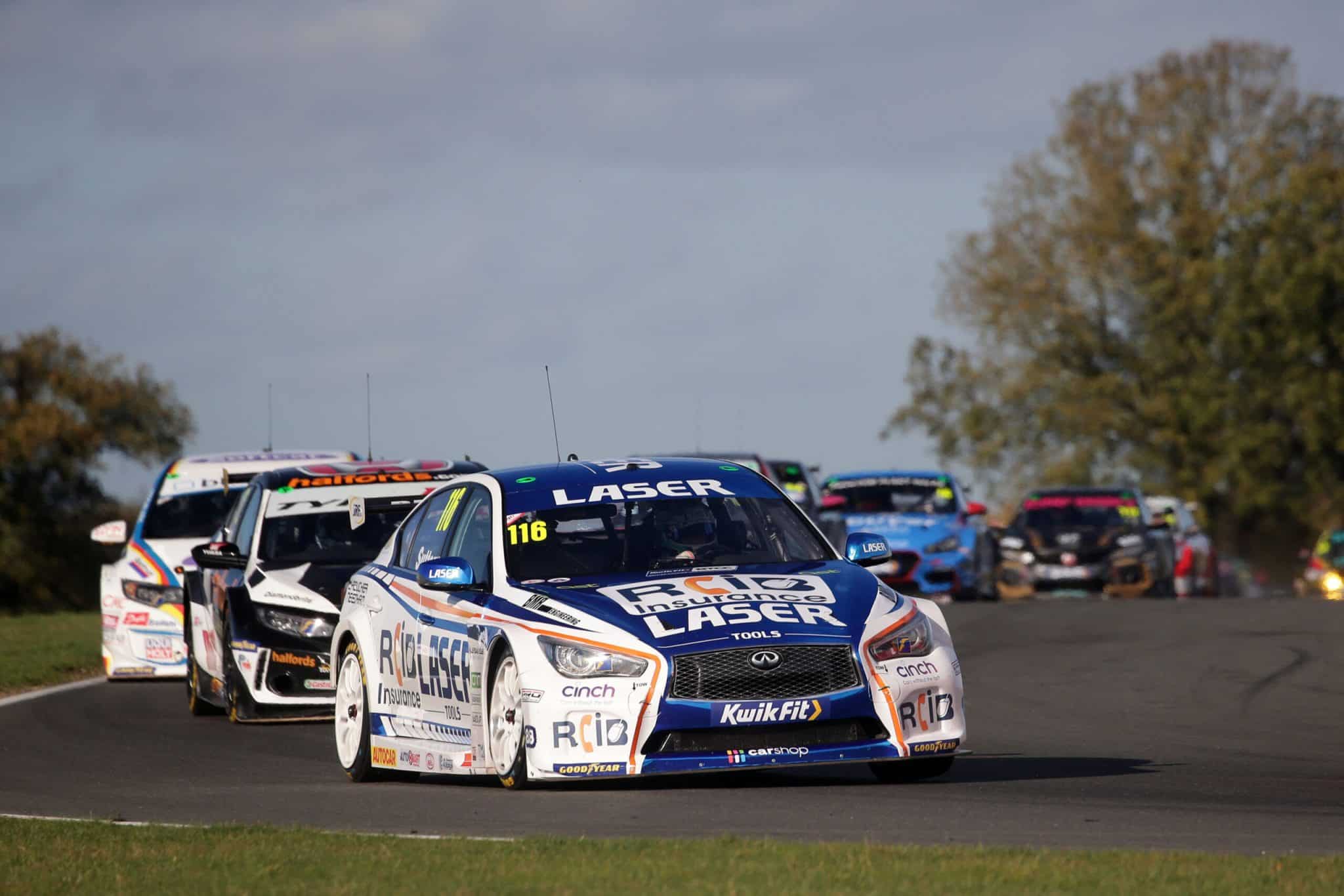 Posted at 11:00h in News, Race Reports by Chris Ashby

Ashley Sutton will head into the Kwik Fit British Touring Car Championship season finale next month firmly in contention to be crowned champion for a second time after producing a hard fought podium performance at Snetterton this past weekend (October 24/25).

In what has been a unprecedented yet blockbuster year, the Laser Tools Racing driver heads to Brands Hatch next month sitting second in the standings and trailing Colin Turkington by just nine points – with a maximum of 67 set to be up for grabs around the Indy circuit.

One title that Ashley won’t need to focus on in less than three weeks’ time will be the BTCC Independent Drivers’ Championship, after he provisionally wrapped up the title for the first time in his career.

Arriving at the Norfolk venue for the penultimate event of the season, the Infiniti Q50 driver and the rest of the grid faced the challenge of cold track temperatures and a new one-off, two-part qualifying format to contend with on Saturday.

Ladened with 60kgs of success ballast, the rear-wheel-drive ace left it late to make it into the ‘Top Ten Showdown’ for pole position and subsequently went onto set the sixth fastest time.

Launching off the third row of the grid for the first of Sunday’s three contests, Ashley survived contact at the first corner to settle into a groove in sixth and chase down the Honda of Dan Cammish. Making a move in the latter stages, the four-time 2020 race winner crossed the line to bank valuable points in fifth.

With a slightly lighter car for race two, the 26-year-old gave chase to the top three and found himself filling the mirrors of Rory Butcher and Tom Ingram for a majority of the bout.

Following a late safety car period however, Ashley finally made his move for third as he seized his opportunity when contact between Ingram and Butcher allowed him to slip into third and claim his eighth podium of the campaign.

Starting eighth virtue of the reverse grid draw, Ashley capped off his day with a fourth place finish following a race of attrition. Much of the early laps saw the former Jack Sears Trophy winner valiantly trying to find a way past Chris Smiley, however the Hyundai proved difficult to displace.

Dropping down a spot when he finally attempted a move, Ashley soon battled his way up to sixth and that would be where he would stay until the final corner, where he gained two more positions after Ingram and Butcher once again came together.

Heading to Brands Hatch, Ashley will carry 54kgs of success ballast into the final three races of the season, with a deficit of nine points to make up on Turkington.

Ashley Sutton: “That was a damage limitation weekend! We didn’t have the outright pace to be at the front but we dug deep and managed to come away with a third, a fourth and a fifth. More importantly, we’re in the mix for the title so it’s game on.

“In race one I suffered some damage so that hampered me and then in race two I just picked my moment and managed to come away with a podium. I think it’s fair to say I was up against it in race three…

“I’m over the moon to have provisionally wrapped up the BTCC Independent Drivers’ Championship though; that was one title that had eluded me up to now so it’s nice to get that box ticked and not have to worry about it heading into the final round.

“We’ve got a nine point deficit to make up on Colin at Brands Hatch and you can believe that I will be coming for him all guns blazing. The whole season has led us to this point and I’m going to throw everything I have into the finale to become champion for a second time.

“Laser Tools Racing and BMR Engineering have done a mega job this year and they deserve to be in this position. I can’t wait to get to Brands now, I’ve got nothing to lose and absolutely everything to gain – bring it on!”

The Kwik Fit British Touring Car Championship will bring the curtain down on its 2020 season on November 14/15, with three races scheduled to play out around the Indy layout of Brands Hatch.