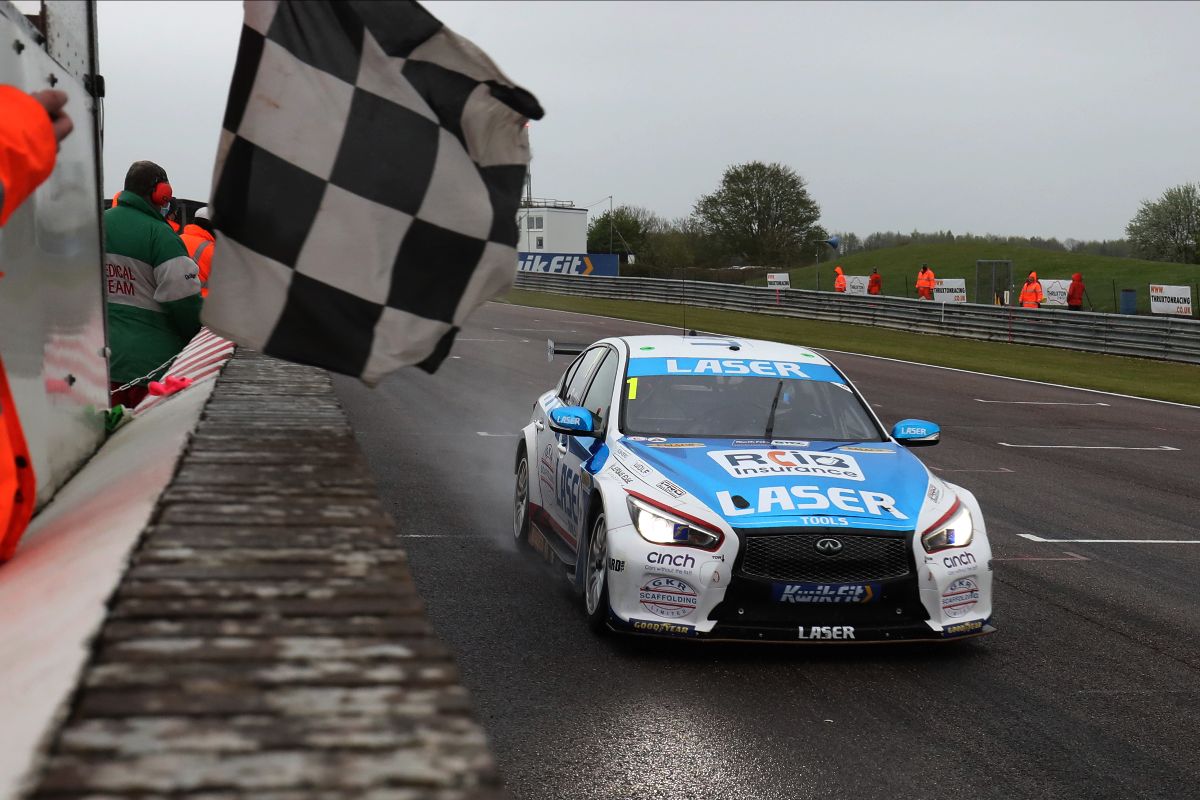 Posted at 10:53h in News, Race Reports by Chris Ashby

Lifting the curtain on a brand new season for Britain’s premier motorsport series around the high-speed Hampshire venue, the Laser Tools Racing driver underlined his status as reigning champion with a trio of standout drives in his Infiniti Q50.

Lighting up the time sheets across both free practice sessions in difficult conditions, the rear-wheel-drive ace showed his class in qualifying as he charged to a seventh career pole position late on.

Having started the session on wet tyres, the 27-year-old joined a number of other contenders in making the switch to slicks in the closing stages and pieced together a superlative lap to snatch top spot and with it the first championship point of the year.

Ashley’s hopes of converting pole position into victory during the opener lasted just a couple of corners unforuntately as he was sent spinning after being hit from behind whilst leading. Dropping to the rear of the field, the BRDC Superstar showcased the overtaking prowess he has become known for down the years by scything his way through the order to finish tenth. This later became ninth following a post-race time penalty for a rival.

Race two would see Ashley forced to dig deep once more as he produced another comeback drive. Following a red flag and then a safety car intervention, the double champion entered the pit lane from ninth to have a minor engine issue rectified before rejoining the back of the pack.

When racing resumed, Ashley set off on his march towards the points and by the chequered flag had picked his way up to ninth.

Bringing the curtain down on the weekend with the reverse grid encounter – his 150th start in the BTCC – Ashley finally clinched a well-deserved victory as the weather conditions fell in his favour.

In what proved to be a pulsating wet-dry-wet contest, the decision to run wet tyres proved to be correct as he jumped from third into the lead in the early stages. Despite those on slicks coming to the fore, dropping Ashley back to third at one stage, a late rain-shower swung the pendulum back his way to allow him to retake the lead and ultimately victory – his 20th in the series.

Following the opening weekend of the season at Thruxton, Ashley sits fourth in the BTCC Drivers’ Championship, ten points off the summit. The defence of his BTCC Independent Drivers’ crown sees him sitting third as the series continues next month.

Ashley Sutton: “Finally we got a win – we needed that! Up until race three it had been a bit of a frustrating race day because the luck just wasn’t on our side and the results didn’t reflect our true pace. To come away with a win, especially in a wet-dry-wet race like that, is perfect.

“Rain or shine the car was phenomenal and I was really happy with the balance. It is a testament to all the work the team have done over the winter, you can see how much stronger the whole package is compared to last year.

“On reflection we should have come away with a bit more from the weekend but that is the way it goes sometimes. I just kept composed and cracked on with the job in hand which was to salvage as many points as possible; going from last to twice made for entertaining TV I guess.

“To leave Thruxton fourth in the standings and just ten points off the top is a real positive though, especially as it sounds like we had a bit of shocker. There is a long way to go in this championship and I’ll be going to Snetterton with my tail firmly in the air!”

The Kwik Fit British Touring Car Championship heads to Snetterton for Rounds 4, 5 & 6 of the 2021 season on June 12/13, with fans set to make a triumphant return trackside to watch the series for the first time in more than 18 months.