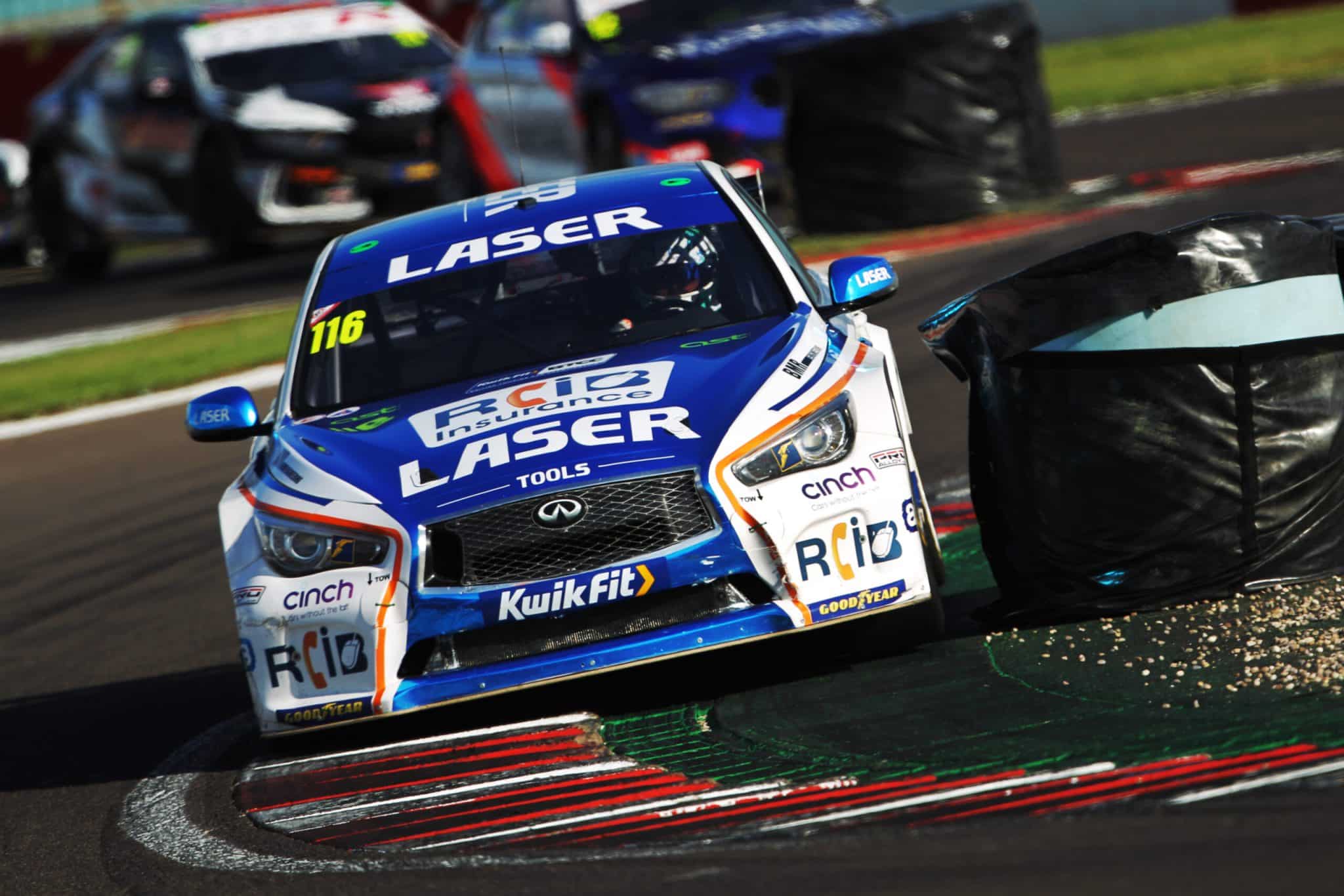 Posted at 17:00h in News, Race Reports by Chris Ashby

Ashley Sutton took centre stage as the Kwik Fit British Touring Car Championship blasted back into life at Donington Park this past weekend (August 1/2), taking a historic first win for the Infiniti Q50.

Despite taking place behind closed doors at the Leicestershire venue, Britain’s premier motorsport series made a triumphant return to racing after nearly 300 days and it was Sutton that produced a superlative performance on his debut for Laser Tools Racing.

Lighting up the time-sheets in both practice sessions, the 2017 champion carried his front-running form into qualifying on Saturday afternoon, setting a best time of 1:09.095 to secure third place on the grid for the first race of three blockbuster races on Sunday.

Jumping Dan Cammish off the line as the lights went out, Ashley soon began to hound Colin Turkington for the lead, sizing the BMW driver up at various points on the circuit. On lap four, the rear-wheel-drive ace got the switchback on Turkington at the exit of the Old Hairpin and the pair then leaned on each other through McLeans, with others hot on their heel.

Unfortunately the concertina effect through Coppice saw the 26-year-old tapped into a spin and tumbling down the order. Rejoining the track in last, the former Jack Sears Trophy champion began a stunning fightback to carve his way through the field and finish 14th – setting the fastest lap on the final tour.

Starting on the seventh row of the grid in race two, Ashley once again proved to be the star of the show as he showcased his overtaking prowess, making several eye-catching passes on his way to yet another fastest lap and fifth at the chequered flag.

The reverse grid draw positioned Ashley in eighth for race three and he wasted no time in beginning his march towards the front, making his way to fourth in the early running.

Part of an enthralling four-way battle for the lead, Ashley completed another series of breathtaking overtakes to blast into first and then pull away from the chasing pack, setting a third fastest lap of the day.

The win not only marked the 15th of Ashley’s BTCC career but also the first for the Infiniti Q50, having made its debut back in 2015.

At the end of the opening event of the season, Ashley sits third in the BTCC Drivers’ Championship and second in the BTCC Independents Drivers’ Trophy.

Ashley Sutton: “What a weekend – I’m over the moon! Coming into the weekend I thought we would be in the mix but this has gone beyond what I expected!

“Pre-season has only seen me do about 15 to 20 proper laps so to qualify third was a great start. What happened in race one was just a racing incident but to bounce back from dead last and finish 14th was a good recovery. From there I was able to fight through the pack for fifth and then take the win in race three.

“It’s pretty cool to be able to go down in the BTCC history books as the first driver to win in an Infiniti.

“As long as we can keep this momentum going, I know I’ve got the best team behind me with Laser Tools Racing and BMR Engineering to launch a title challenge – the results this weekend mean a lot to everyone involved and they deserve all the credit.

“This car is phenomenal and it gives me such confidence to drive it the way I have been – its the best I’ve ever felt in the car. I’m really looking forward to going to Brands Hatch GP and seeing what we can achieve there in a few days time.”

The Kwik Fit British Touring Car Championship is back in action in under a weeks’ time on August 8/9, with Rounds 4, 5 & 6 taking place around the Grand Prix layout of Brands Hatch.