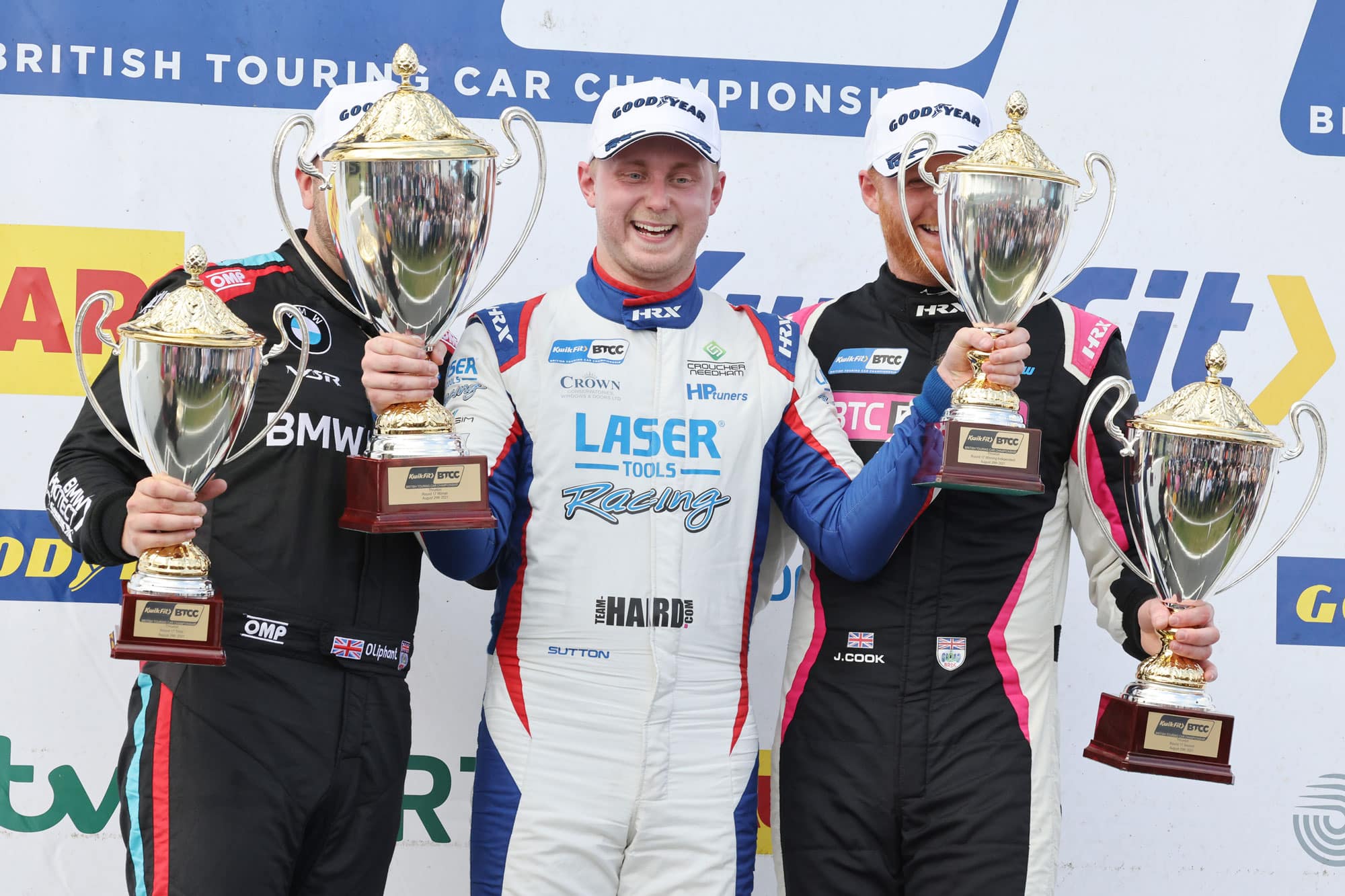 Posted at 10:48h in News, Race Reports by Chris Ashby

Ashley Sutton cemented his advantage at the summit of the Kwik Fit British Touring Car Championship standings at Thruxton this past weekend (August 28/29) by claiming a commanding fourth win of the season.

Storming to victory in race two, the Laser Tools Racing driver finished fifth and tenth in the other two contests to leave the high-speed Hampshire venue with a 30-point cushion over the chasing pack.

Making his second visit of the year to Thruxton – having kicked off the 2021 campaign there back in May – the double champion was in high spirits and that continued in qualifying as he produced a superlative lap despite being ladened with 75kgs of success ballast.

Setting a best time of 1:15.862 in his Infiniti Q50 around the 2.36-mile circuit, Ashley secured seventh on the grid for the first of Sunday’s three races.

Focused on scoring a solid haul of points and shedding some ballast in race one, the 27-year-old delivered a measured drive to pick his way up the order, taking the chequered flag in fifth.

It was race two where Ashley really came to the fore though as he charged to an impressive victory. Carrying less weight, the 27-year-old’s rear-wheel-drive machine came alive and he had many on the edge of their seats as he completed a sensational move on two cars around the back of the circuit in the early stages.

By lap four, the BRDC Superstar had caught and passed the BMW of Tom Oliphant for second and then set about closing the gap to race one winner and good friend Josh Cook.

Reeling the Honda man in over the course of the next few laps, Ashley made his move on lap 11 as he utilised having the better run out of the final chicane and slipped pass on the approach to turn one.

From there, Sutton maintained a comfortable lead for the remainder of the bout and powered his way to a 23rd career victory.

Starting the reverse grid contest from eighth, Ashley capped off his day with a battling drive to tenth, banking more vital points in the quest to defend his title.

Ashley Sutton: “It’s been a really good day! Coming into the weekend I had it mapped out that race one was about getting a solid result and losing some ballast, then we could really go after it in race two and chase a win.

“Josh didn’t make it easy for me in that second race. I made a few passes early on but once I got into second it was hard to gauge if I was catching him, then my engineer came over the radio and said I’d taken a few tenths out of him – from there it was game on and I managed to get the move done.

“Race three was very stop-start and I was just trying to manage things. It was a bit unfortunate when Tom [Ingram] came through as I was trying to duck in behind him but I just got out of sequence and that dropped me back a few spots.

“Overall it has been another mega weekend! I’ve come away extending my points lead and picking up another win at what is probably the only bogey track for me and the car left on the calendar.

“We go to Croft next – which I love – and the aim will be the same once again; to either maintain or extend the championship lead. I’m not getting ahead of myself as there is a long way to go and plenty can still happen, but we’re where we want to be.”

Croft Circuit provides the next stop on the calendar for the Kwik Fit British Touring Car Championship as the series heads to North Yorkshire for Rounds 19, 20 & 21 on September 18/19.