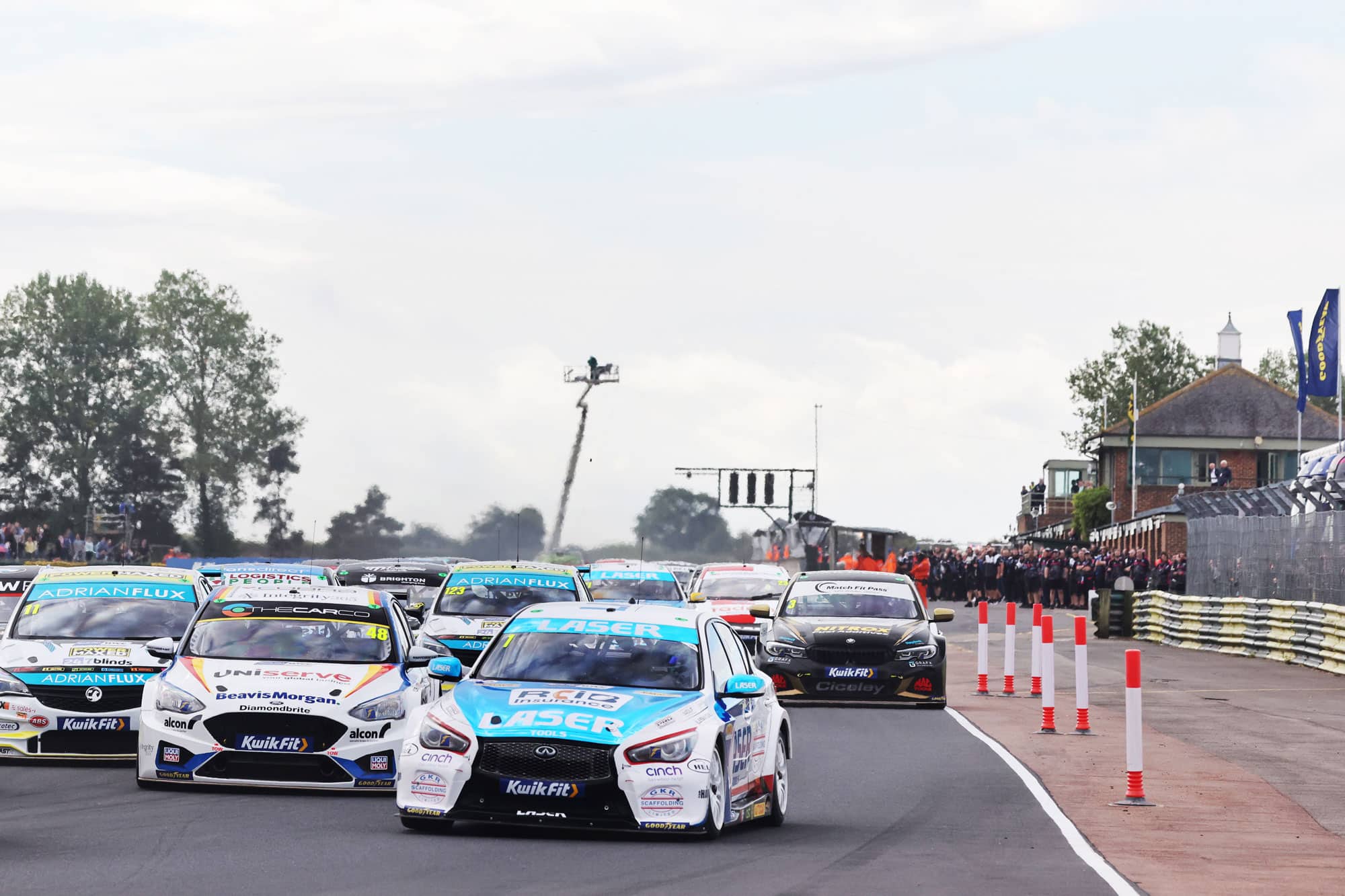 Posted at 10:50h in News, Race Reports by Chris Ashby

Ashley Sutton scored a hard-fought podium at Croft this past weekend (September 18/19) to maintain his lead at the summit of the Kwik Fit British Touring Car Championship standings with three events to go.

On what proved to be a bruising race day at the North Yorkshire venue, the Laser Tools Racing driver clinched a fifth and sixth before charging to third place in the reverse grid encounter to leave him 29 points clear of his closest title challenger.

After fine-tuning his Infiniti Q50 during Saturday’s two practice sessions, the double champion delivered an impressive performance in what was a truncated qualifying session – despite being ladened with 75kgs of success ballast.

Disrupted by two red flag stoppages, the session saw a flurry of improvements come in the closing stages and Ashley would be one to move up the order as his best time of 1:22.297 secured eighth on the grid for race one.

Lining up on the fourth row for the opening contest, Ashley held position in the early stages of the bout before beginning to make progress. Completing an impressive pass on Adam Morgan through the Complex and exiting the Hairpin, the 27-year-old went on to take the chequered flag in sixth.

Race two was to be one of attrition with Ashley firmly in the thick of the action as an almighty battle for second place played out. With a number of the championship’s leading lights battling for position, the BRDC Superstar had a number of physical wheel-to-wheel battles and when the dust settled he crossed the line in fifth.

Starting the reverse grid encounter from third, Ashley capped off his weekend by scoring his seventh podium of the season.

Hot on the heels of Gordon Shedden throughout the 16-lap race, the rear-wheel-drive ace posed a constant threat to the Honda driver but despite making several attempts at an overtake, he was ultimately forced to settle for the final step on the podium.

Ashley Sutton: “It’s been another solid points collecting weekend and to come away from Croft still 29 points in the lead of the championship is mega!

“Race one went as planned by moving up the order despite carrying full weight however I had hoped for a bit more in race two. It all got a bit out of hand at times in terms of the amount of contact that was being dished out and although I had the hunger to move further forward, fifth was the best we could manage.

“To come away with a podium in race three was good. I clouted the kerb at turn one on the first lap and from then on I had a big vibration on the right front which I had to manage. I had a couple goes on Gordon but I couldn’t prize open a gap; third with the fastest lap is a great result.

“I’ve got to give a huge amount of credit to everyone at Laser Tools Racing though, it has been an epic weekend for the team. I’m really happy for Aiden getting pole, a win and a second and Carl [Boardley] also as he won the Jack Sears Trophy – we’ve got some real momentum behind us now!

“We head to Silverstone this coming weekend and I’ll go there with the same mindset as always, to maintain or extend my lead in the points. It’s a circuit I enjoy and carrying the weight won’t hurt us as bad as it does at other circuits so I’m optimistic I can score big.”

It’s a quick turnaround for the Kwik Fit British Touring Car Championship with Rounds 22, 23 & 24 taking place at the Home of British Motor Racing, Silverstone, on September 25/26.