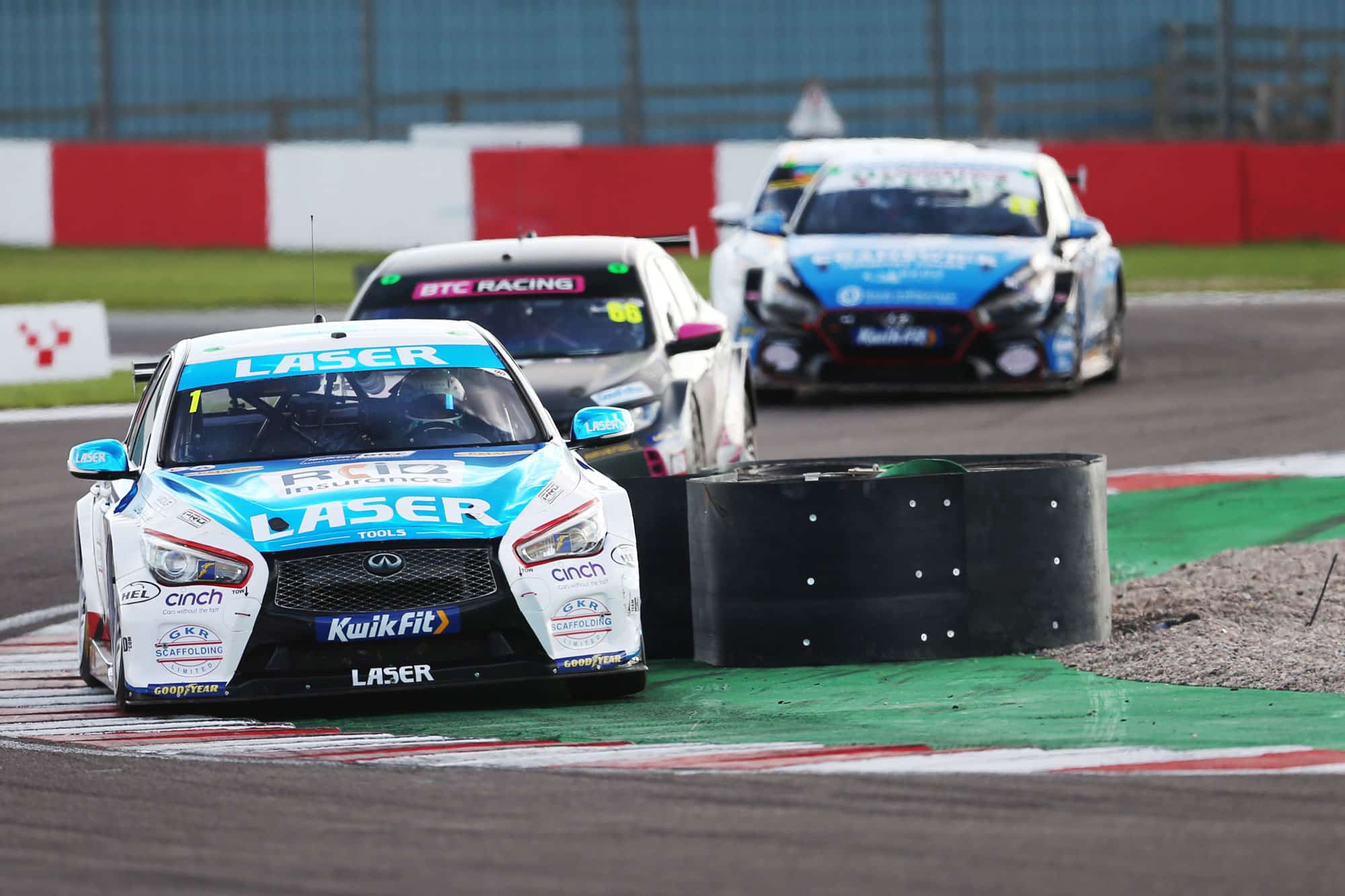 11 Oct Title advantage ahead of finale

Posted at 10:53h in News, Race Reports by Chris Ashby

Ashley Sutton will take a 32-point lead into the Kwik Fit British Touring Car Championship season finale in less than two weeks’ time after scoring a trio of top eight results at Donington Park this past weekend (October 9/10).

The Laser Tools Racing driver kept his cool during what was a bruising race day at the Leicestershire track to add three more points finishes to his tally and ensure he heads to Brands Hatch at the summit of the standings as he chases down a third title.

Saturday’s qualifying session saw the popular ‘Top Ten Showdown’ format make its final appearance of the season and the 27-year-old once again emerged as one of the leading lights.

Progressing into the battle for pole position, the Infiniti Q50 driver powered his way to a best time of 1:09.493 around the 1.97-mile circuit to secure ninth of the grid for the first of Sunday’s three races.

Race one would see Ashley produce a consistent drive as he moved up the order to finish seventh. Dropping a spot on the opening lap, the double champion wasted no time in taking back the position before the safety car made an appearance.

When racing resumed, the rear-wheel-drive ace slipped down the inside of both Josh Cook and Daniel Rowbottom at McLeans before going on to record the fastest lap and end the 19-lap contest on the bumper of Jason Plato.

The second encounter proved to be a race of two halves for Ashley as he attempted to stay out of trouble and preserve his healthy points lead. Shuffled back to tenth in the early stages, the BRDC Superstar bided his time before fighting his way back up the order.

With his car coming alive just after mid-distance, Ashley was soon the driver to watch as he carved his way through the top ten to take the chequered flag in fourth.

Starting the reverse grid bout from eighth, Ashley capped off the penultimate event of the season with another solid points finish. Scrapping with title rival Tom Ingram for a number of laps, he soon found a way past and went on to claim eighth place.

Heading into the series finale at Brands Hatch, five drivers remain in mathematical contention to lift the biggest prize in UK motorsport however it is Ashley that will go there in the pound seat holding a 32-point advantage.

In addition, Ashley also continues to lead the way in the BTCC Independent Drivers’ standings whilst Laser Tools Racing have a comfortable cushion in both the Teams’ and Independent Teams’ categories.

Ashley Sutton: “It’s been a good day! Laser Tools Racing did a mega job all weekend and to come away with three points finishes is great. It was tough and we had to dig deep for them but we ultimately got the job done that we came here to do.

“We’ve only lost four points to the other title contenders so I’m pleased to be going into the finale with a 32-point buffer. Brands Hatch is a circuit I love and I’m confident we will have a good package there, no matter what the weather may throw up.

“Every race that goes by is a little bit more weight lifted off my shoulders, its immense pressure at the moment. We just need to maintain the physical, mental and car performance for Brands now.

“I’m in the best position to be in with the points in the bag so it will be about keeping our nose clean, taking it one race at a time and fingers crossed that will be enough to wrap it all up. I can’t wait to get there!”

The Kwik Fit British Touring Car Championship will bring the curtain down on its 2021 season on October 23/24, with three races set to play out around the Grand Prix layout of Brands Hatch.