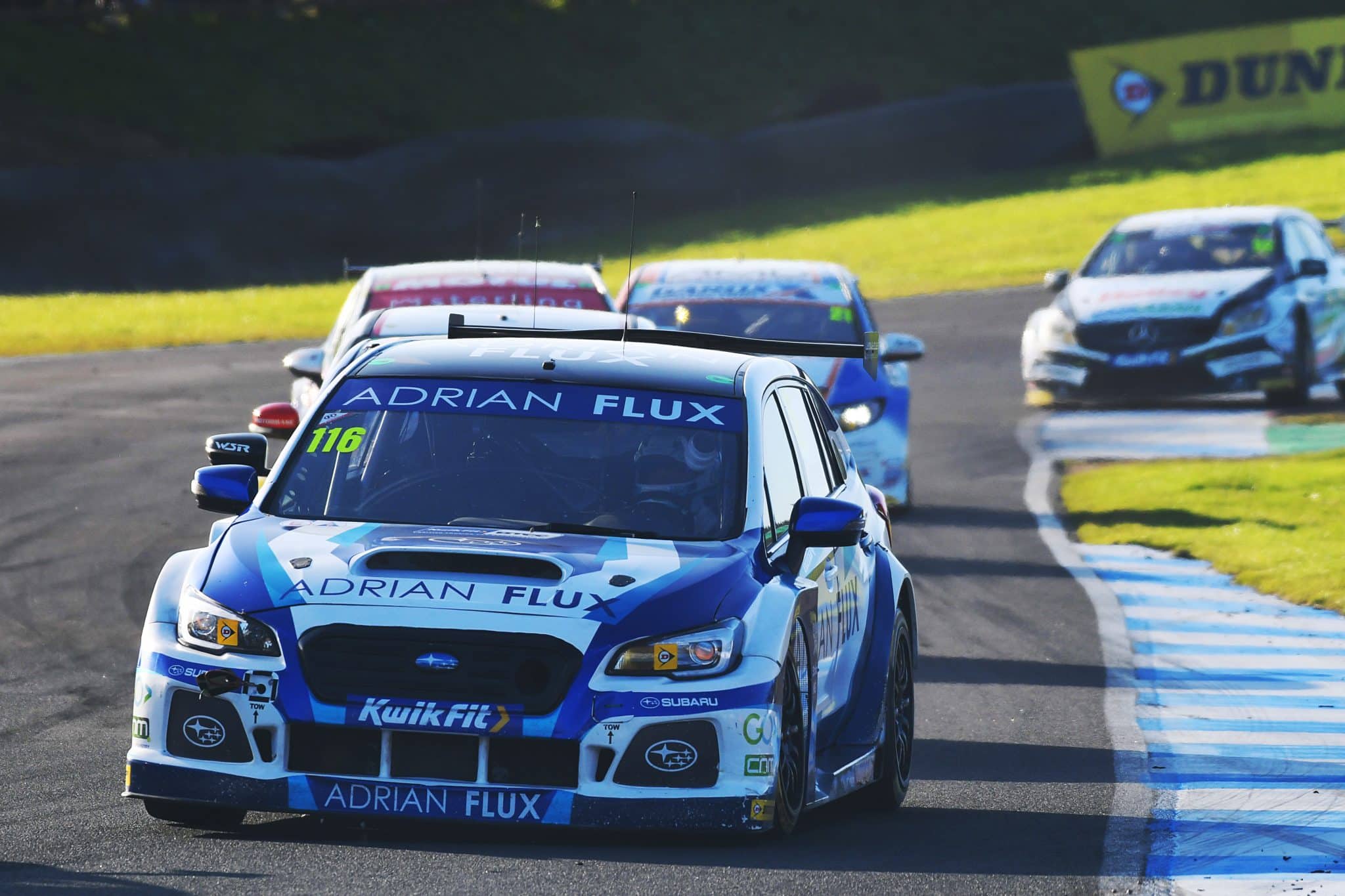 16 Sep Weekend to forget for Ashley Sutton at Knockhill

Posted at 21:00h in News, Race Reports by Chris Ashby

The Kwik Fit British Touring Car Championship’s annual trip north of the border to Knockhill proved to be one to forget for Ashley Sutton, who once again produced trio a battling performances.

In what was proved to be a blockbuster visit to the Fife venue, the Adrian Flux Subaru Racing driver fought tooth-and-nail for a solitary points finish.

Qualifying on Saturday around the undulating 1.27-mile circuit proved to be a frenetic affair as the 30-car grid battled for all-important track position.

Despite encountering a few issues during the session, the 2017 champion valiantly wrestled his rear-wheel-drive machine to a best time of 51.010 to secure 14th on the grid.

Lining up on the seventh row for the opening encounter, the 25-year-old was soon on the move as the lights went out, moving up to 12th by the end of the first lap. Soon after he was hounding the back of Matt Neal following several laps behind the safety car, but his race unfortunately was to come to a premature end.

Carrying plenty of momentum through Duffus Dip and Leslie’s, Sutton made a late lunge down the inside of the Honda driver into Scotsman, however contact between the pair left the Subaru ace with a broken rear suspension and forced to limp back to the pit lane.

Free of success ballast and starting towards the back of the field for race two, the GO Homes-backed driver was again a man on a mission and soon began scything his way through the field – with a move around the outside of Scotsman garnering plenty of appreciation from those watching on trackside.

Running as high as 12th at one stage, the former Jack Sears Trophy champion dropped down the order to 16th at the chequered flag, narrowly missing out on scoring points.

The third and final race of the weekend from the picturesque Scottish venue brought further frustration for Sutton as he once again battled to break into the top ten.

Producing a valiant defence against the BMW of Colin Turkington for a majority of the 24-lap encounter, Sutton underlined his credentials behind the wheel with a sterling performance, to come away with a 12th place finish.

Ashley Sutton: “It’s been another frustrating weekend, at a circuit where on paper we should have been strong, and we’ve come away with just a handful of points.

“From a team perspective though I’m really happy for Senna to come away with his best finishes of the season. He’s been working tirelessly and that was a great reward.

“We’ll look to bounce back as a team at Silverstone and see what we can achieve – it would be nice to sign off the remaining two events with some success.”

The Kwik Fit British Touring Car Championship now heads to Silverstone on September 28/29 for the penultimate event of the 2019 season around the Northamptonshire venue’s National layout.