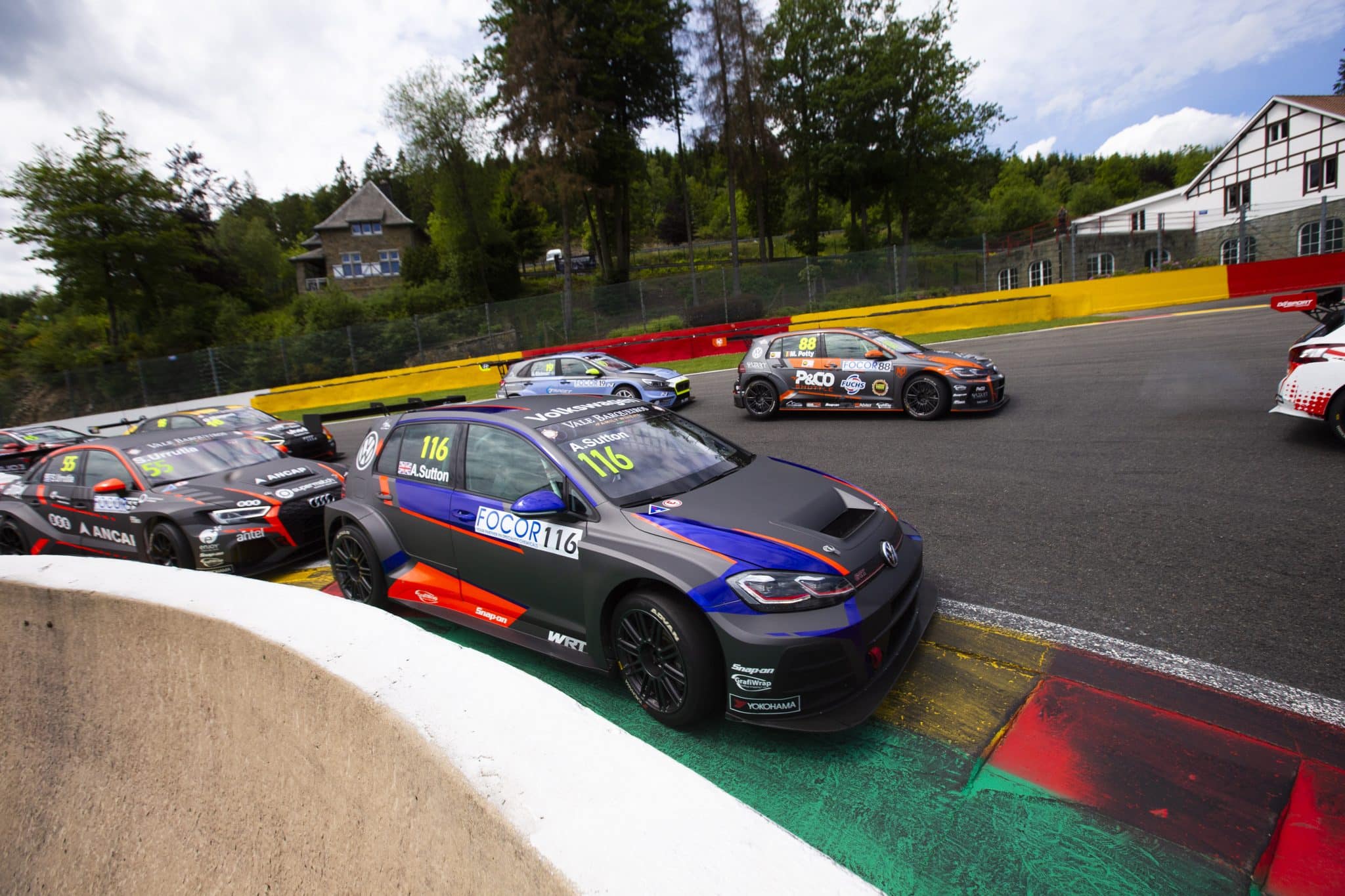 Posted at 12:46h in News, Race Reports by Chris Ashby

Ashley Sutton was left satisfied with his performance in Spa-Francorchamps this past weekend (June 8/9) after making a return to TCR Europe.

Having secured a late deal to drive a Volkswagen Golf GTI for Belgium-based outfit Team WRT, Sutton showed his star quality amidst a bumper entry list.

Despite competing around the iconic Spa-Francorchamps layout for the first time, Sutton was no stranger to TCR machinery having enjoyed his first experience last year. Joining the TCR UK ranks in a Honda Civic at Oulton Park, the 2017 BTCC champion won two races before then going on to score a podium in the TCR Europe finale later in the year.

Tasked with carrying out testing on the new-for-2019 C-ECU unit after the latest Balance of Performance adjustments over the course of the weekend, Sutton was also ladened with 80kg of ballast – the full compensation weight of 60kg and a further 20kg for being a late entry.

Familiarising himself with both the car and the team throughout Friday’s two free practice sessions, the 25-year-old underlined his talents behind the wheel as he finished fourth in what proved to be an ultra-competitive qualifying session.

Unfortunately, Sutton’s hopes of a podium finish in the opening encounter were over before the race had even begun as his Volkswagen suffered an electrical steering wheel issue as the field pulled away from the grid for the formation lap.

Forced to start from the pit-lane, the multiple BTCC race winner would go on to showcase his overtaking prowess as he began to scythe his way through the field following an early safety car period.

Following several battles in the midst of the action, Sutton fought his way inside the top 20 to take the chequered flag in 19th, narrowly missing out on a points finish.

Lining up seventh for race two, the former Renault UK Clio Cup champion was able to demonstrate his front running pace as he went wheel-to-wheel with the lead pack.

On the move as soon as the lights went out, Sutton had already moved up into fifth by the end of the first lap, and that would be where he would finish come the end of the encounter – despite having run as high as fourth earlier.

Boasting plenty of speed to keep the chasing pack behind, the Team WRT driver couldn’t make any in-roads into the top four. Following the race however fifth was to become fourth as a post-race investigation saw Jimmy Clairet penalised and Sutton elevated to fourth place.

Ashley Sutton: “It was great to get another shot at TCR Europe and I’m pleased with how the weekend panned out on reflection. Carrying the extra weight that we had meant that it was always going to be a little tough but we dug deep.

“Everyone at WRT made me feel really welcome, which I thank them for, and I was impressed with the Golf. This weekend was always about just collecting data and to come up with a strong fightback after an issue in race one and then go on to just miss out on a podium can leave us feeling positive moving forward.

“Now the focus switches back to the BTCC and to Croft this weekend, where I’m hoping we can ramp up our title challenger even further.”

Sutton will now return to Kwik Fit British Touring Car Championship action this coming weekend (June 15/16) at Croft Circuit for Rounds 10, 11 & 12, a track that has proven to be a happy hunting ground for him and Adrian Flux Subaru Racing in recent years.

The event will be a milestone one for Sutton and Subaru too, with race one at the North Yorkshire venue set to be the 100th start in the BTCC for both.